Screen for the SONY PRS-300 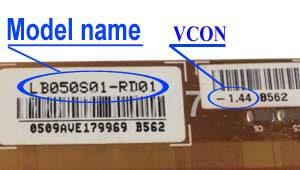 In e-books SONY PRS-300 the most often installed screen is LB050S01-RD01, made by LG Display corp. (http://www.lgdisplay.com/eng/main)

In order to install the display LB050S01-RD01 to the e-book SONY PRS-300, to see the appearance and location of the label with a marking on the display and to determine the necessarity of next regulation of the e-book you can use our universal method:You can watch the videoinstruction about disassembling the e-book and changing the broken screen in the site youtube.com, using this link: