The majority of Americans and Englishmen at words "the electronic book" imagine the Amаzon Kindle. The American company Amazon is the leading manufacturer of electronic books in the world. Now there are issued four models of electronic books: Kindle Touch Special Offer, Kindle 3 Wi-Fi, Kindle 4 Special offer, Kindle Paperwhite. All models are equipped by screen E-Ink Pearl with the size of 6 inches, have the qualitative plastic case of a small thickness. These models are issued by the company in two variants - in ordinary and in a variant with the advertising blocks appearing on the book at power on, sold on lower price. Such low price became possible at the expense of payment of a part of cost of the book by advertisers. Moreover, on money of advertisers Amazon supports the electronic Internet library. So cost of the electronic book from Amazon includes access on Wi-Fi to its electronic library with possibility of downloading of some free books.

Kindle 3 Wi-Fi has the high-grade keyboard located under the screen. On the one hand it raises functionality of the device, with another increases its sizes.

Model 4 Special offer hasn't touch screen. It is equipped by "navigation" buttons in the bottom part of the case under the screen, and also convenient keys for browsing of the pages, located on each side cases.

Kindle Paperwhite is a latest model of devices for the reading, developed company Amazon. The device screen touch, e-ink HD (758x1024 points) has received name Paperwhite. Distinctive feature of this model is presence of smoothly adjustable light-emitting diode illumination with which it is possible to read in the dark. Kindle Paperwhite is issued in two updatings: with support wi-fi only or with support wi-fi and 3G. All other functional possibilites the reader practically do not differ from Touch Special Offer.

Kindle Paperwhite 2013 is a modification of Kindle Paperwhite, which is using new generation E-ink screen - E-ink Carta, which has higher contrast of pictures. Other characteristics and appearance of the model of 2013 year are the same. 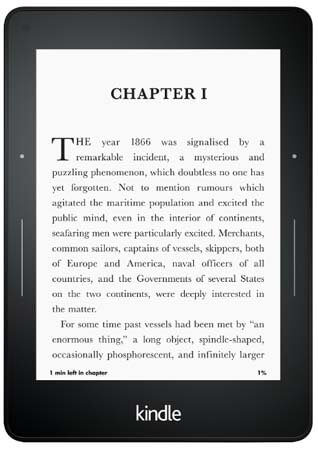 Kindle Voyage is a novelty from Amazon. The construction of this reader, to compare with Paperwhite model, was significantly changed. In promotional information is said that it's the thinnest e-reader. It's thickness is just 7,6 mm and weight is 186 g. Apply a rather unusual shape of the case, power button is now located on the back of the case to the right. To the left and to the right of the screen there are touch keys for scrolling, that lets the user comfortably hold the device by any hand.

The screen of this device today doesn't have any analogues. It is touch E-ink Carta with diagonal of 6 inches and a new resolution - 1080h1440 points. It has backlight, which intensity depends on the level of exterior lighting. So, the darker is in the room, the brighter is the backlight. There is installed special tempered glass with anti-reflective coating to protect the screen from mechanical damages.

Memory volume, which is available to user is 4 Gb. This model still doesn't have a connector for inserting a memory card.

Price of the device at the moment is just astronomical.


General characteristics for all e-book readers:

The majority of lacks of the software of these models can be eliminated installation of a foreign update with a program for reading of text COOLREADER, how to make it is written here: Alternative firmware.


Selection of resources of the Internet about Amazon Kindle is in section "Links."