The bottom keys of smartphone

Attention: authors aren't responsible for malfunctions of your devices, which can be got as a result of using this information. Everything you do is for your fear and risk. Using of such method removes your smartphone from warranty service! 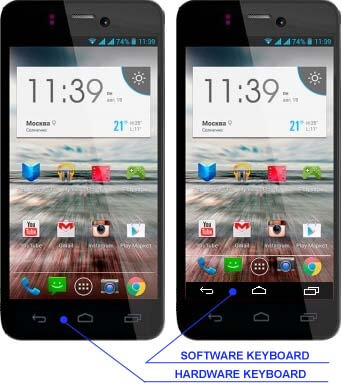 Such malfunction of smartphones happens very often: everything works, except functional bottom keys. So, you can exit from any app only by rebooting your phone.

Using of such device is impossible and ordering the new touchscreen is very long or just impossible. Nowadays some spare parts for different models of smartphones can't be found easily.

But this problem can be solved without opening the case of the device by turning on of the Android operating system software support function keys. In this case at the bottom of the screen appears area with a duplicate of the old function keys. This opportunity was provided for the correct operation of the models of tablets and smartphones which do not have the hardware function keys.

To activate this function it's enough to insert the line "qemu.hw.mainkeys=0" at the very end of the file /system/build.prop, but the file can be edited only by a superuser.

As a result we get extra functional keyboard above the malfunctioned and admire the work with your phone. The last two steps can be changed by downloading of the app Soft Buttons from Google market, which will do the same things automatically.