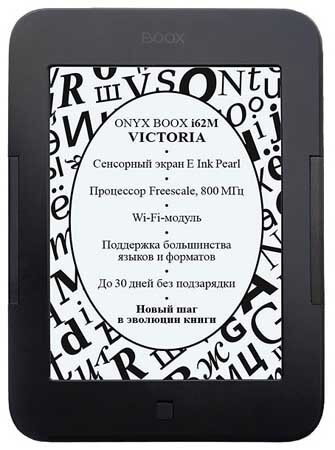 i62m Victoria, i62m Albatros, i62m Dream differ from each other only in colour of the case and the price. The case of model Victoria is black, Albatros - white, Dream - grey. The screen of devices - E-ink Pearl touch, a diagonal of 6 inches, the permission is standard - 600 on 800 points. At model Dream the screen touch E-ink Pearl HD with the permission 758 on 1024 points. All models have module Wi-fi, the Internet browser, support almost all formats of files. Browsing keys on electronic books are located on both sides that allows to hold equally conveniently them by any hand. Loading of additional applications, games and fonts TTF are realised. There is a quite good file manager for management of files.

Very interesting developers have approached to realisation of reading of documents. In the menu of "ADJUSTMENT" for reading of formats FB2 and EPUB it is possible to choose one of two programs for reading the most popular in Russia - FBReader, established on all readers Pocketbook, or CoolReader, established on LBOOK reader. In the last case footnotes in the text should be displayed in the bottom of page. 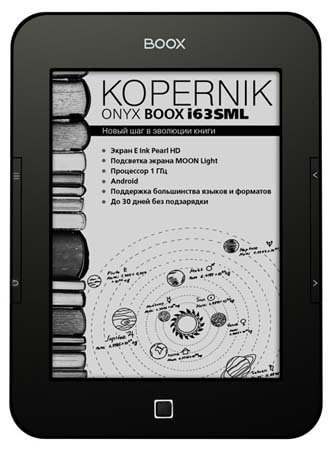 A model i63SL Kepler screen is not touch, no module wi-fi, but there is an audio jack for ear phones, internal memory - 4 Gb.

A model i63ML Kopernik is different from Kepler merely the absence of a jack for ear phones.

A model i63ML Maxwell has a touch screen, wi-fi module and internal memory of 8 Gb. There is no jack for ear phones.

All models allow you to use additional applications for android format. Apk. Bookshelf readers is improved for a little. Now it shows the book covers, but still does not show the titles and authors' names. Function keys are located on the sides of the device, they can be swapped, but unfortunately can’t be configured to simultaneously flipping pages and the left and right arrow keys.


Selection of resources of the Internet aboutOnyx BOOX is in section "Links."

James M. Cain "Metro 2034". An amoral young tramp. A beautiful, sullen woman with an inconvenient husband. A problem that has only one grisly solution--a solution that only creates other problems that no one can ever solve...