The company PocketBook places manufacture of its devices in China. Corporation Netronix was producing e-readers until recently, In the user manual of models 515 and Mini 614, 623, 624, 626, 640, 650 as a manufacturer was specified "Shenzhen Itva Digital Applians Co. Limited". Books qualitative enough execution and as the software is developed with the assistance of the Ukrainian experts the feature set in these devices is very rich and corresponds to our wishes.The firmware will be constantly improved. For books of this firm there is the alternative software, games, and additional applications.

All readers from Pocketbook are supplied with a little preinstalled library on several languages. On the site of support of the company it's always possible to download English-Russian, Russian-German dictionary and explanatory dictionoryof Dal for each produced model.

Models 360 plus and 360 Plus New - are unique five-inch screen devices (E-ink VizPlex), let out PocketBook. On parametres they are almost identical, therefore we consider them together. Electronic books of these models are executed in the plastic case with a protective plastic bonnet. The bonnet protects the screen at device transportation, at reading it can be fastened to the bottom part of the case. As a result it is possible to use the book without a cover or a purse. Command keys are located on the right side of case. In the centre the joystick, and from above and from below browsing keys are located. In the book is gyro sensor (accelerometer) which watches the device orientation, correctly turning the image at case turn. For example, if you were tired to thumb through the right hand, turn the device on 180 degrees and thumb through the right hand.

Model Basic 611 - the device with 6-inch screen E-ink VizPlex, is executed in the qualitative plastic case. At this e-book reader of a key of browsing and the joystick are located from below that is not always convenient. Keys soft, are easily pressed. In the rest - a fine combination of rich feature set and the low price. From here and the name: BASIC - base model.

Model Basic New or Pocketbook 613 - practically a copy of electronic book Basic 611 without module Wi-Fi and with a little changed software, sold at lower price.

Model Pro 602 - the device with 6-inch screen E-ink VizPlex, except keys of browsing and the joystick, located below the screen has browsing and exit keys in the menus located on the right, for pressing them a hand thumb. In the book is accelerometer which watches the device orientation, correctly turning text on the screen at case turn. In the rest the book is similar to 611 model.

Model Touch 622 - the device with 6-inch touch screen E-ink Pearl. It hasn&t lateral keys of browsing, but in the presence of the touch screen in them there is no necessity. The newest model from PocketBook with the greatest feature set and possibilities at enough attractive price.

Pocketbook Basic 2 (Pocketbook 614) is very similar outwardly to an increased copy of model 515 mini. This new budget model with 6 inch screen E-ink Pearl (600x800), which is coming on replacement to Pocketbook 613, which is taken out of production. Unlike model 515, here is a slot for a memory card. When the device is switched on, you can see that the interface and system of menu has changed just a little to compare it with Pocketbook 613. All keys of management are still situated under the display. Keys for scrolling are touch, they're situated on the both sides of the joystick. Outwardly they look like two small projecting tubercles and react on not a strong push of the finger. Complectation of the device is usual. A box, an e-reader, a short instruction and USB-cable. A link to the operating instruction is on the last tab of comparative table "Complectation and functions".

Модель Touch 626 (Touch Lux 2) is a copy of Touch 623 with a new microprocessor. The speed of an e-reader has increased on 20 percent.

Model Aqua 640 is a device with touch screen e-ink Pearl (600x800) in a watertight case. Of course, a reader won't sustain complete immersion into the water, but it is not afraid of getting drops of water and sand onto the screen and case. For this property had to pay by a slot for a memory card - it simply does not exist. However, internal memory is 4 Gb, it's enough for keeping a big library.

Model Ultra 650 is an e-reader with new design and a bit unusual functions. There is a camera with a resolution of 5 megapixels in this device. It's not quite clear for what does an e-reader need a camera, but it's not its' main advantage. In Ultra 650 is used a touch screen of the last generation e-ink Carta with regulated LED backlight and a resolution of 758x1024 points, high-performance microprocessor and a module of Wi-Fi. 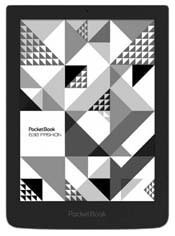 Model 630 Fashion is the only reader of extra class, which is sold in complect with a cover designed by KENZO stylized as crocodile skin. The screen of the model is touch, E-ink Pearl HD with resolution of 758x1024 dots. On both of the sides of the screen keys for scrolling are situated, it allows to manage the book by any hand. In Pocketbook 630 is a slot for micro-SD card, Wi-Fi module and LED backlight of the screen.

The latest versions of the firmware available on the official website of the Pocketbook, have the opportunity to downloads books from OPDS-libraries.

The manufacture of the device is interesting. All last models of Pocketbook are made on Shenzhen Itva Digital Applians Co. Limited, but in instruction to Pocketbook 630 Fashion as a manufacturer is "Firm Hengyang Shentian Precision Electronics Co. Ltd.", information about which in the internet is extremely small.

General characteristics for all e-book readers:

To clean a lack of the program of reading it is possible to load the alternative program:
FBReader180 или Coolreader

Selection of resources of the Internet about Pocketbook is in section "Links."