The tablet does not turn on and does not charge

Attention: the authors are not responsible for the malfunctions of the e-books, tablets, smartphones and other mobile devices, which can appear as a result of using this information. Everything you do is at your own risk! Using this information removes the device from warranty service!

Very frequent malfunction of e-readers, tablets and smartphones is lack of reaction to the power button and to connection of the charger. There are many articles on this topic in the Internet, for example:эта, эта и эта. But, unfortunately, the problem with storage battery is not fully reflected there. Usually, the malfunctions, in which an e-reader or a tablet does not submit life signs, are divided on malfunctions of software, mechanical damage - the device itself or the USB-port or the charger is broken, malfunctions of electronic components and overdischarge of the battery.

We are going to talk about last one. Most often, this kind of malfunctions comes if your device was discharged and then have not been used for some days or weeks. You have tried to charge it, but there is no reaction neither to pressing the power button nor to connecting of the charger, and it is no matter how long did you leave it on the charge.

To avoid this situation, you have not to leave your device completely discharged for a long time. Anyway, if it happened, you need to charge the battery artificially by disabling it from the pad (e-book). For this, you have to disassemble your device (there is a lot of information on YouTube how to disassemble pads. About e-books, you can see it here, on our website.) Then, you need to disconnect (or unsolder) accumulator from your device and connect it to the external source of energy for 10-30 min. As the external source of energy, you can use universal charger for lithium-ion accumulators or laboratory power supply with the current stabilization mode (beforehand make current not more than 400mA). The main thing is not to reverse the polarity and not to exceed the current.

If you do not have a universal charger or a laboratory power supply unit then you can use a power supply unit from stationary computer if you assemble a simple scheme of SATA power adapter of hard drive and resistor 5 Watt capacity, 22 Ohm impedance. 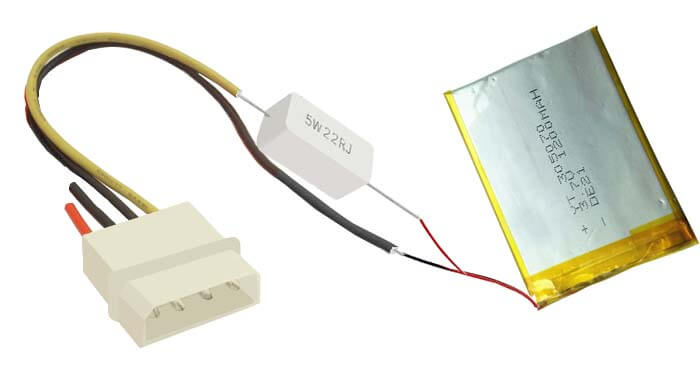 It is nesessary to control the temperature of the accumulator while charging it at least to the touch and to stop charging in case of its' significant increase. Otherwise, the accumulator can ignite or even explode. Be careful since the resistor heats up strongly while working.

Usually 30 min of charging is enough to increase the voltage to 3.6 - 3.7 volt. It is enough to reestablish the operability of the device. After installation of the accumulator to its' place and connecting the staff charger to the tablet or the e-reader normal charging process begins in most cases.

James M. Cain "Metro 2034". An amoral young tramp. A beautiful, sullen woman with an inconvenient husband. A problem that has only one grisly solution--a solution that only creates other problems that no one can ever solve...