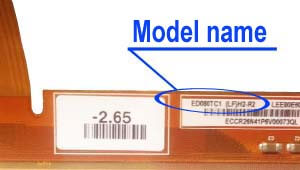 In e-books Onyx BOOX i86ML Moby Dick the most often installed screen is ED080TC1(LF), made by E-ink corp. (http://www.e-ink.com)

Many people can think it is strange that the e-book is sensor but the display is not. The matter is that the sensor type of Onyx BOOX i86ML Moby Dick is infrared. Such a sensor is a separate product - frame with optical sensors. It is installed along the perimeter of the screen. It is important to install it exactly into the old place while you are assembling the device.

In order to install the display ED080TC1(LF) to the e-book Onyx BOOX i86ML Moby Dick, to see the appearance and location of the label with a marking on the display and to determine the necessarity of next regulation of the e-book you can use our universal method: