Screen for the Kobo Aura H2O 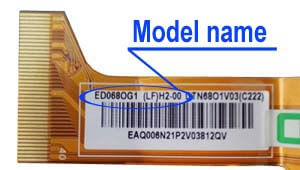 In order to install the display ED068OG1(LF) to the e-book Kobo Aura H2O, to see the appearance and location of the label with a marking on the display and to determine the necessarity of next regulation of the e-book you can use our universal method:You can watch the videoinstruction about disassembling the e-book and changing the broken screen in the site youtube.com, using this link: